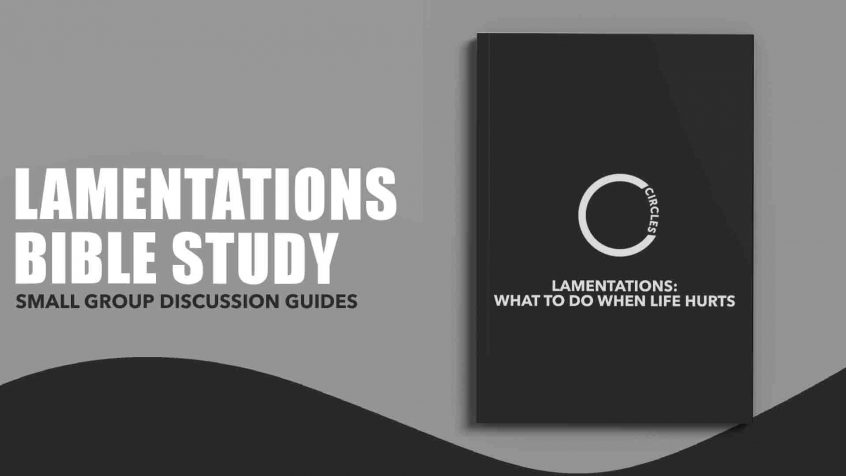 This free 3-part Bible study on Lamentations will help your students learn how to lean on God as they face disappointments and struggles.

Have you ever felt like your whole world was falling apart right in front of your eyes? Sometimes life feels like a battle, and you feel like you’re losing. This was the experience of someone in the Old Testament named Jeremiah. He was a prophet to the nation of Israel during one of the most difficult events in their history — the first destruction of Jerusalem.

During Jerusalem’s destruction and Jeremiah’s breakdown, he wrote the book of Lamentations. The Hebrew people simply call this book Eicha, which translates to “How?” The ultimate question is, “How could God let something like this happen?” Jeremiah wrote Lamentations to explore the character of God in the midst of conflict and the meaning of life in the midst of misery. Each chapter is a distinct poem designed to help the Jewish people make sense of their suffering.

Lamentations is an invitation for us to ask these questions too. We have all experienced loss, hopelessness, sadness, and remorse. This Bible study will help us learn how to lean on God through overwhelming difficulties and struggles.

HERE IS HOW THIS FREE BIBLE STUDY ON LAMENTATIONS BREAKS DOWN:

If you were to read the whole book of Lamentations, the first two and a half chapters would be absolutely depressing. It’s just question after question and doubt after doubt. It’s really tough to read. However, something amazing happens in the middle of the short book. Despite all the darkness on these pages, some light breaks through in verse twenty-one. This simple verse acts as a hinge of hope. Jeremiah cries out the name of God. Through tears, he says, “therefore I have hope” (Lamentations 3:21).

Where does Jeremiah find hope? In the name of God. The name of God is a hinge of hope — bridging the gap of what is bad to who is good.

Part 2: The Solution to Suffering

Imagine being in Jeremiah’s position. He’s numb from all the pain. He’s in shock from what he’s watching unfold before his eyes. While watching this devastation, he starts talking about the promises of God. His shaking pen writes, “Great is your faithfulness. The Lord is my portion” (Lamentations 3:24). With tears in his eyes, he knows that God is on his side. What did Jeremiah cling to during crisis? God’s character.

Part 3: The Solution to Isolation

King Solomon rebuilt the massive religious complex after its first destruction by the Babylonians. Whenever a Hebrew laid eyes on the temple, they would inevitably think, “look at how far my people have come.” Things took a tragic turn though. Under Nero’s command, the entire Roman army stormed the city of Jerusalem in 70 AD. They set houses on fire, murdered thousands, and destroyed the temple brick by brick.

The Hebrews experienced the collective suffering of the siege, so they isolated themselves. Their pain led to isolation, and their isolation led to loneliness. We tend to follow the same cycle, but God has something better in mind for us.

This small group Bible Study on Lamentations is based on a free sermon series! Click here to view the #Struggles Sermon Series.