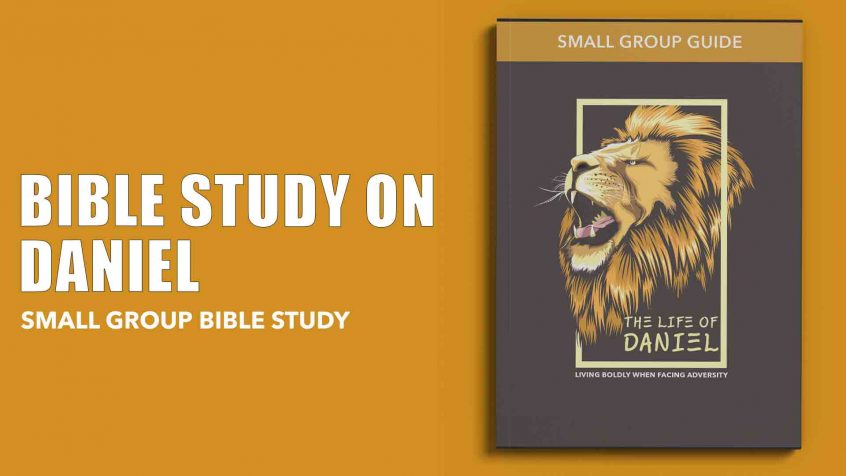 This 3-part free Bible study on Daniel will help your students learn how to live bold lives of faith by studying the life of Daniel.

HERE IS HOW THIS FREE SMALL GROUP Bible Study ON DANIEL BREAKS DOWN:

Part 1: HOW TO LIVE BOLDLY WHEN FACING ADVERSITY

The book of Daniel tells the story of a charismatic seventeen-year-old leader from the lineage of King David named Daniel. He and his friends were forced to live in Babylon after his city of Jerusalem was seized and enslaved. The people of Israel were forced into exile under the harsh dictatorship of Babylon. This kingdom was completely opposed to belief in the true God.

In the first chapter, Daniel was recruited to work for the government of King Nebuchadnezzar because of his strength, knowledge, and handsome looks. Seriously, look at verse five. During his orientation ceremony, he was offered a buffet of junk food with an open bar. Daniel realized that the food was completely contrary to the Kosher commandments in Jewish scripture. Eating this food would break the promise he made to God. Thus, he politely asked not to partake. Daniel 1:8 elaborates, “Daniel was determined not to defile himself by eating the food and wine given to them by the king.”

If you want to be strong in the face of adversity, then you will need to foster some of the character traits of Daniel in Babylon. If you were to flip forward a few pages, you will see that his story is packed full of miracles. However, the first chapter doesn’t share anything supernatural. It’s all about a young man’s willpower. Do you want to be like Daniel? Then you need to be disciplined. Learn to adamantly say yes to what’s best for you and firmly say no to what’s bad for you.
Scripture: Daniel 1

Part 2: BEING FAITHFUL IN THE FIRE

At the beginning of Daniel 3, Nebuchadnezzar decides to order a custom-built statue. This thing was huge, measuring 90-feet high and nine feet wide. Most scholars believe this statue was actually an image of the king himself. As if that wasn’t narcissistic enough, he mandated that everyone in the nation bow down before the newly-minted idol.

The conflict between the men of Israel and the King of Babylon hit a tipping point in the third chapter of Daniel. If Daniel and his friends obeyed the king and worshipped the idol statue, they’d be betraying God. If Daniel and his friends honored God by refusing to worship the idol, they’d be thrown into a fiery furnace for disobeying the King. Do they disobey God to save their lives, or do they disobey the king to face execution in a furnace? This wildfire of a story gives us three keys to living boldly in the face of adversity.
Scripture: Daniel 3

Part 3: CHARACTERISTICS OF A BOLD LIFE

At the beginning of chapter 6, life is a dream for Daniel. Now he is a “satrap” (6:1-3), which is basically a mayor with more power. Daniel exudes so much wisdom and promise that the king planned to promote him to oversee the entire nation. Jealousy plagued the rest of the rulers. They scoffed, “How could the king give so much trust to an old man from Judah? His people are captives of the kingdom. Why does our ruler adore him?” The other Satraps decided to create a scandal. These leaders knew that Daniel openly prayed three times a day, so they lobbied for a new law to make prayer illegal. Once the law was on the books, they started stalking Daniel to wait for his rebellion.

Daniel persevered, though. Despite it being illegal, he continued to pray three times a day publicly. He knew there would be consequences. He knew people were likely watching. Everyone knew the king had a den full of hungry lions waiting for anyone who disobeyed the King’s new law. None of that stopped David from being persistent in his calling and devotion to God. A fearless life is a life of devotion, persistence, and discipline.
Scripture: Daniel 6

This Bible study was adapted from our sermon series on Daniel. Click here to view the Sermon Series. You might also like these free Bible studies for youth.

Find community in the Pastor Circle:
We understand how difficult it can be for pastors to find support. That’s why we created the Pastor Circle! This virtual small group for ministry leaders gives pastors a support system of peers and a pastor. Learn more by emailing Pastor@ForMinistryResources.com or clicking the button below.

LEARN MORE ABOUT THE PASTOR CIRCLE

Our FMR pastors want to connect with you! Click here to contact our curriculum pastor, pastoral support, ask questions, or receive help with navigating our website.

You’re invited to The Pastor Circle, our virtual small group for ministry leaders! Join us to connect with a community of pastors while receiving personal discipleship and leadership guidance from our Pastoral Support team and chaplains. Learn more about the Pastor Circle by clicking here.